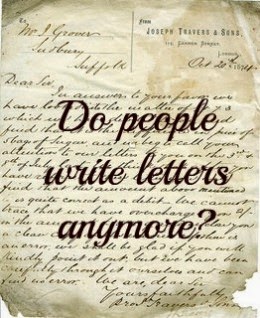 I watched a music video a couple of days ago. The song, featuring Tosin Martins and Waje, addresses how back in the days lovers were made to earnestly articulate their feelings to one another on a piece of paper as it was the only means of communication to their significant other, miles away. Alas, those days are now in the past because what letters internally conveyed then, buttons on a keypad can now.

As I watched, I had a momentarily flashback to my first love letter (una ears don dey stand abi. I be gal nah.). It was in my junior year, from a boy in my class who was too shy to even hand over the letter to me himself; he had to use an intermediary (smiles). To cut the long story short, the whole thing didn't last a full term. It fizzled out in two weeks or so, despite the gifts and lunch money I received from him.
Anyways, I remember those years of writing and reading letters. We had to stay up late at night writing letters to cousins we haven’t seen in ages. Daddy reminding us that he will be traveling early so we need to write our letters a day before he leaves. Oh boy! We racked our brains to make pleasantries. Who remembers the phrases like ‘with my golden pen of love i write....’, also ‘from a fountain of love and river of kindness i write....’. Hmmm, we were so young and innocent.
I had my own share of letters, rarely wrote, but was given a lot (grins).
Presently, letter writing is fading away gradually. Old fashioned stuffs like love letter rarely exist. Girls aren’t wooed like before and the guys aren’t courteous as then.
Remember when you had to smuggle a love letter into the house and read it in the toilet or hide in the room, and then smile like you won ‘baba ijebu’ (i remember hiding in the toilet so mum won’t catch me. winks). Remember when girls use to dwindle their foot in the sand and say ‘let me think about it’ (as if they do. lol). How love letters were read over and over again evoking love and emotions as if the person was saying it out loud to you. How they were saved so carefully so as to go back to it.
Now, SMS, calls, facebook messages, etc, have taken over the old fashioned letters. I really enjoyed those days of letter writing. Who misses it? Cos I do.
Posted by Unknown at 19:25