APC vs PDP: Who deserves the crown? 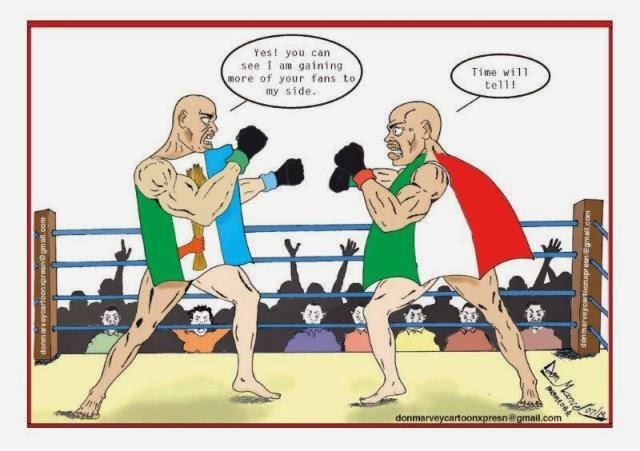 My lovelies, I'm really sorry for not posting anything yesterday. Hmm, my phone and MTN network showed me pepper yesterday (I'm sure some of you have the experience of typing severally only for the document to disappear instead of publishing. Well, that was part of my problem yesterday. #shakes head). It is well with my soul ooo. I'm trying again today and I'm seriously using fire prayer on it. It must work oo(Lol).

Back to the subject matter. I've tried ignoring dis 4 a long time but I don't think I can anymore. Anywhere I go, Pdp dis, Apc that. In the bus, market, street, office, church, everywhere. How long will I have to endure this torture biko?. Whenever it comes to politics in Nigeria, I simply block everything that's happening around me, then pretend I'm Cinderella in the palace!

Some people argue that Jonathan hasn't performed well so he should go, some say he has so he should stay, others agree that he hasn't performed well but he should be allowed to repeat so he'll provide us with two million jobs, give us better roads and stable electricity like oyibo man's land. A lot on the other hand wants Apc to rule, giving instances of what Buhari had done in d past and what he can still do when voted in as President. How he'll give us stable light also, provide millions of jobs, send corruption parking including stealing.

Biko, this election should just come so we'll all get it over with. The sooner this happens, the better for us all cos e don they turn fight everywhere. Imagine, some of my friends are now part-time enemies because of APC and PDP. I had to dive under the table like jet lee to avoid the items thrown at each other landing into my eyes during one of their arguments (abeg see me oo).

I'm not political, never loved politics, never will. May change my views later cos I'm seriously thinking of contesting in 2019 though (who knows, I might be the first female president in Naija. Hehehe. Don't forget to vote me in. Lol). My own take is that, anybody God has ordained for that position should go there and perform. Let there be a better Nigeria for a change. Pdp-power, Apc-change. Oya, who the cap fits should wear it well.

People, go out and vote, cast your vote for a better government. As for me, I'll be watching you on the TV as I eat my guguru and groundnut and sipping my zobo (cos every effort to get my voters card has proved abortive). I'm out of this matter, cos unlike Wizkid, I won't die ontop of dis matter.