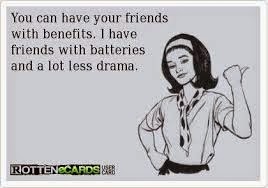 Okk, I happen to be meeting different kinds of people lately in the bus. So, that's how I was minding my business oo in d bus on my way home yesterday then this bros siting close to me started toasting me. Chai God, why must it be only bus toasters, why can't a broz in d latest car in town stop me and den happily ever after follows? (Lolz). All these nollywood movies can deceive, they make us think life is all awesome and rosy while its not, mtchww (rolls eyes).
Anywayz, back to the story. Na so broz start jist oo, how he loves me from d bottom of his heart and he hasn't felt the same way since he set his eyes on me and how he couldn't resist talking to me since I entered the bus. Gbam, see love in tokyo. Anyways, I told him I'm not interested. Broz kept quiet and i thought finally the storm was over, the next thing I heard was "ok nne, since you don't want 2 date me, can we atleast be friends with benefits?" Hehehehehehehe, friends with gini (what)?

This wasn't the first time I was hearing that, infact a married friend of mine recently confessed to me how he recently broke up with his side chick cos he couldn't bear what he was doing 2 his wife (atleast he has a conscience), but d girl who had initially known he was married couldn't take it, she threatened fire and brimstone and then finally said how heartbroken she was. Heartbreak ke? Weren't you the one that agreed to do friends with benefits? What were you expecting? I laugh in chinese.

Biko, I'm not trying 2 ruin anybody's fun, all I'm saying is that why should i get into something that will later give me high blood pressure? We ladies are fragile and really emotional, the initial plan wasn't to develop feelings for him but at the long run you do, but broz doesn't want to go to the next level with you. Hia, see gobe. Biko, I'm tryin 2 protect what's left of my heart, don't want to start wailing about heartbreak that I caused for myself.

So to those people in my category biko, let's save our hearts, to the other group, ehmm goodluck wit the FWB. Heheheheehe.
Biko, I'm introducing another section here. Its called d tatafo levels. If you get any tatafo gist for the house, holla at me for my email also, pamciekeem@gmail.com, make I knack am for here.
Also send emails on experiences or issues you need advices on.
Abeg I wan rest, APC campaign rally at the stadium in Lagos almost brought me close to tears. The traffic eehhh, na fire. I sat in the bus for two hours and trekked for almost an hour. Hmmm, not easy at all. Please if you are coming there or in the traffic already, you are on for a very looonngg thing. Sorry oo. Byebye.
Posted by Unknown at 14:08