Greener pastures: There or here? 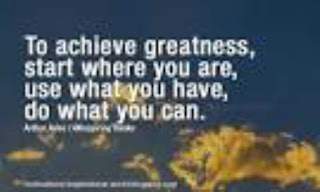 As I sat in the bus going home from work the other day, my mind played back a conversation I had earlier with a friend. He was of the opinion that he would do "anything" not to be in this country, cos the prevailing economy favors the "made" men. He further said that in America and Europe, in six months to a year, he would have made it big enough to own cars and lands. Really??

While in the bus through the traffic jam, all I did was think. Did God make a mistake in making my friend a Nigerian? Years ago, another friend of mine jokingly said, he wondered why our great grand parents didn't allow themselves to be taken as slaves, we would be Americans by now", I can remember asking him, what if they were later shipped to South Korea or somewhere that isn't America. As the humor died down, I wondered, if I was born an American, what would flood my mind. What people fail to understand is that God never makes mistakes. You are created/ and in a situation for a purpose, but we are too blind to see/know it, and always want to go through short cuts.

Many Africans have died trying to make it to Europe. From boat mishaps to starvation and sickness, law enforcement wahala, yet, many still risk their lives to be in Europe. Why do we always believe the grass is always greener at the other side of the world when we don't water our lawns? I've been reading lately of Nigerians having 1st class in American universities. Do we think the same students will make same in Naija? Maybe or maybe not.

Let's start doing what we can here and now, it may look small, but like a seed that sprout into a tree, it started small. Start now, water it, it will get greener and bigger than you ever imagined. Cheers.
Posted by Unknown at 13:26