What will you do? 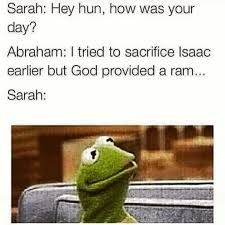 This picture cracked me up. Lol.

Abraham in the Bible was considered the greatest friend of God. For those of us that have forgotten, Abraham was told to sacrifice his only son, a son he spent years waiting for to have. The only thing he loved most apart from God.
I attimes wonder how Abraham felt when he heard that command from God. How many of us can actually give up that which we love most? That which we have labored most to get?

If roles were changed and you were asked to do same. What would be your reaction? This may probably be the dialogue.

God: My son/daughter, sacrifice your son, your only son to me.
Me: Baba God, why na? Can't you ask of something else? E no bam at all ooo.
God: It's only Isaac I want.
Me: Baba, can I think about it please.

And after foiled sacrifice and both father and son were coming down, just imagine the awkwardness that would be .

Abraham: I love you very much my son.
Isaac : If I hear. Na love you love me wan go kill me abi?

Almost every child will hold a grudge against their father in such situation.
If you were Isaac, wat would you do?
And if you were instructed by God to do such, what will you do? Be honest, and remember, it's easier said than done.

Happy weekend to you all.