Give it a topic biko. 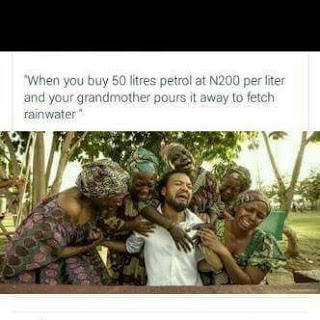 Ok, this pics really got me ROTFL. Grandma but why???

So, two nights ago, I was trying to sleep right about midnight, then I heard a noise from my neighbors house. I listened carefully thinking it was the men of the night but thankfully they weren't the one. Ok, let me digress a bit. This neighbor happens to be a Pastor, and his house is after ours. This man prays and burns this very annoying incense (apologies), I just had to call it annoying cos it enters my house and disturbs my peaceful night rest. Some of us here may testify about its smell. Despite all, the man portrays his Pastor-hood nicely.

Anyways, on the said night I heard the noise coming from his house, inform of heated argument, mostly done in Yoruba regrettably cos I couldn't understand anything, Chai. Then a hot slap followed suite, and then screams of a woman. Ok, now I was fully awake, the argument continued, more hitting and screams in Yoruba.

This continued for an hour or so, then later quietness. So I got thinking, what on earth should have made a man of God hit his wife? Isn't he supposed to be a role model? Isn't he supposed to live by a good example for his followers to be guided accordingly? Imagine his church memeber hearing such a thing, what will go through the person's mind. Then again, I thought about Pastor's indulging in divorces, fornication/adultry and what not, well... Why should men even hit their wives?

I pray God gives us the grace to not be misguided.

Do have a lovely weekend ahead.
Ehmm, anyone buying things this black friday should remember that my shoe size is 41/42, not 40 biko. Thanks and I love you always.

**** Giveaway coming soonest, it will come like santa clause shaa, so you better watch out. Heheheehehehe.****
Posted by Unknown at 16:02